Speaking to investors during Remgro’s results presentation, CEO Jannie Durand said CIVH is one of their most valuable assets as it operates in a high growth space.

He added that Remgro is investing in CIVH as they see a lot of growth potential in the telecommunications market.

CIVH chairman Pieter Uys added that there are many areas where CIVH, Vumatel, and DFA can replicate its successful open access, wholesale business model.

The areas which CIVH is currently exploring include data centres, tower infrastructure for mobile networks, and rolling out a wholesale mobile network.

These edge data centres can be upscaled into a more mature data centre business in future.

Looking at mobile tower infrastructure, Uys said Vumacam’s 3,000 camera poles can be used as facilities for a wireless mobile network.

The Vumacam poles have electricity feeds and are connected to Vumatel’s fibre network, which makes them suitable to serve as high-density mobile network sites.

This infrastructure can be used by either the current mobile players or CIVH can use it to launch its own open-access wireless network.

The biggest prize for CIVH will be to roll out a national wireless open-access network (WOAN), which the government has been punting.

Vumatel and DFA specialise in open-access networks, and a wireless network built on the same principles, therefore, fits in perfectly with CIVH’s portfolio.

CIVH showed strong support for the WOAN in submission to ICASA, saying it has the potential to transform the industry.

It called for assigning spectrum in the 700MHz, 2,600Mhz, and 3,500MHz bands to the network to ensure a sustainable structure.

CIVH has three major assets which form the foundation for its future growth – its growing fibre and IoT networks, a strong management team, and Remgro’s financial backing.

Vumatel and DFA are working in tandem to build a national fibre network to provide access to South African businesses and homes.

CIVH is also a large shareholder in SqwidNet, which has been in operation as the licensed Sigfox operator in South Africa since 2016.

SqwidNet’s IoT network currently covers over 90% of South Africa’s population and 90% of the country’s national roads.

This management team positions CIVH as a strong telecommunications player in South Africa and a potential mobile player in future.

CIVH’s growth is, however, highly dependent on getting enough capital – something which Durand and Uys are well aware of.

“From where we sit the only restriction for strong growth is to get enough capital into the business,” Uys said.

To get more capital into the business, CIVH’s management launched a primary capital raise programme in November 2019 targeting R6 billion in funding.

This money will be employed for Capex and to be ready to pay off some of CIVH’s debt over the next two years.

Uys said this process slowed down during the COVID-19 pandemic, but it was recently reactivated with a lot of interest from the market.

If all of these plans come together, it will create a new wholesale telecommunications powerhouse in South Africa operating in the fibre, mobile, and data centre market.

The image below shows the opportunities which CIVH sees in the South African telecoms market. 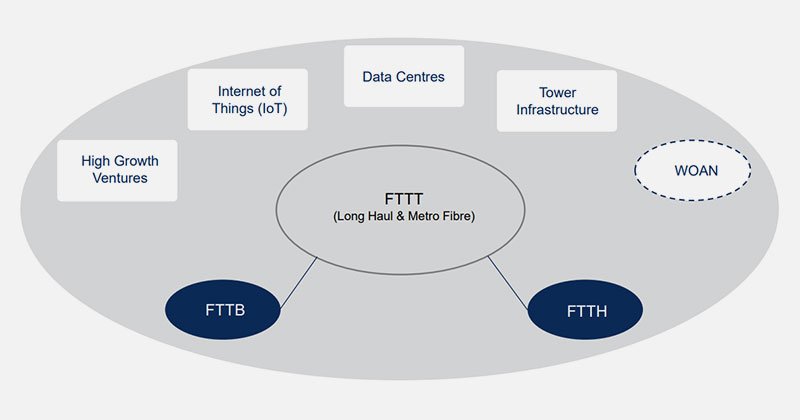